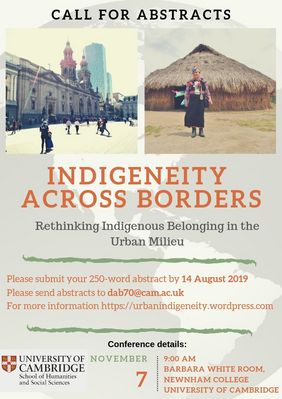 As a reflection of the growing trend of global urbanisation, the urban milieu is rapidly becoming the main residential site for indigenous peoples worldwide, representing one of the most important challenges faced by modern indigenous societies.

Land dispossession, poverty, militarisation, natural disasters, lack of employment opportunities, and the deterioration of traditional livelihoods have been among the factors that have contributed to indigenous peoples’ migration and settlement in cities. Whatever the reason that have led to this condition, indigenous peoples in cities often face particular challenges that make them vulnerable to a range of socio-political and economic inequalities. As the literature on indigenous peoples reveals, poverty and racism have prevented indigenous peoples from significantly improving their living conditions when they move to cities.

The Indigeneity across Borders workshop is seeking contributions that address, but are not limited to, the following questions:

Abstracts should summarise the objectives of the proposed paper and explain how they relate to the key questions addressed in this call. Abstracts should not exceed 250 words and include a title for the presentation, the names, contact details and affiliation of all authors.

Keynote speaker: Professor Andrew Canessa, Head of Department of Sociology, U. of Essex

There are no fees to pay and light meals will be provided during the day.