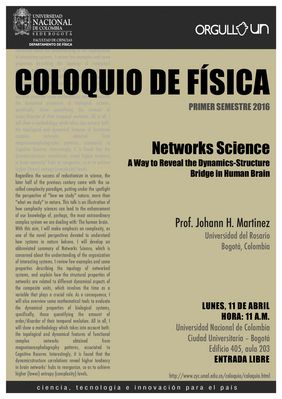 Regardless the success of reductionism in science, the later half of the previous century came with the so-called complexity paradigm, putting under the spotlight the perspective of "how we study" nature, more than "what we study" in nature.

This talk is an illustration of how complexity sciences can lead to the enhancement of our knowledge of, perhaps, the most extraordinary complex system we are dealing with: The human brain. With this aim, I will make emphasis on complexity, as one of the novel perspectives devoted to understand how systems in nature behave. I will develop an abbreviated summary of Networks Science, which is concerned about the understanding of the organization of interacting systems. I review few examples and some properties describing the topology of networked systems, and explain how the structural properties of networks are related to different dynamical aspects of the composite units, which involves the time as a variable that plays a crucial role.

As a consequence, I will also overview some mathematical tools to evaluate the dynamical properties of biological systems, specifically, those quantifying the amount of order/disorder of their temporal evolution. All in all, I will show a methodology which takes into account both: the topological and dynamical features of functional complex networks obtained from magnetoencephalography patterns, associated to Cognitive Reserve. Interestingly, it is found that the dynamicsstructure correlations reveal higher tendency in brain networks? hubs to reorganize, so as to achieve higher (lower) entropy (complexity) levels.