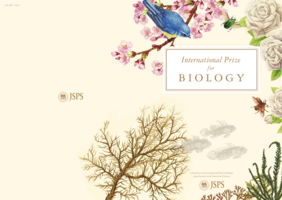 The International Prize for Biology was instituted in April of 1985 by the Committee on the International Prize for Biology at the Japan Society for the Promotion of Science. It aims to commemorate the sixty-year reign of Emperor Showa of Japan and his longtime devotion to biological research and also to offer tribute to the present Emperor His Majesty Emperor Akihito, who has strived over many years to advance the study taxonomy of gobioid fishes while contributing continuously to the developing of this Prize. The award ceremony is held in the presence of His Majesty the Emperor.

Each year, the International Prize for Biology is conferred upon a distinguished researcher in a field selected by the Prize Committee from among all the fields of biology. Based on nominations gathered from around the world, the Prize is awarded to a biologist judged to have a superlative record of achievements in the subject field. Once every decade, “systematic biology and taxonomy” is selected for the Prize as it is the field in which, like Emperor Showa before him, His Majesty the present Emperor has conducted research over many years

The research field of the 2017 Prize: Marine Biology