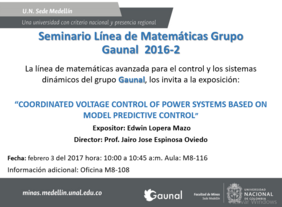 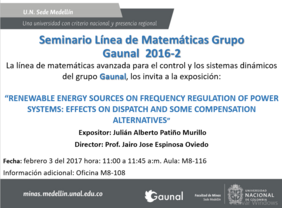 Maintaining the voltage profile of an electric power system within a convenient operating range has been a key task of network operators to offer their users a reliable, secure and stable service. Although various voltage control devices are incorporated into the network to provide local compensation for system disturbances, it is necessary to coordinate these regulators to ensure an appropriate distribution of the reactive power resources in the network, which will eventually allow compensate the general voltage profile of the system, even in situations of failure.

For some thirty years, additional regulatory stages have been incorporated into the electrical systems to control the reactive power flows between their different zones, however, in most countries a manual adjustment of this resource is still made based essentially on the experience of network operators, which can lead to unsatisfactory response to particular events that require complex decisions. In the last years several investigations have been exploring the incorporation of model predictive controllers that substantially improve the results obtained until now in the control of the voltage of the network.

This presentation exposes the most relevant results in the implementation of these regulators and shows where the most relevant research in this area is headed. Additionally, some preliminary simulation results of the predictive control applied to voltage regulation in a power grid are shown.

Renewable energy sources on frequency regulation of power systems: Effects on dispatch and some compensation alternatives

The integration level of renewable energy sources into the grid system over the world has been growing. In future, renewable-based power is expected to be at least comparable to the conventional power generation systems. Nevertheless, the variations in renewable power could induce negative effects over power systems, such as frequency disturbances. Given these conditions, there may also be a need to rethink the classic frequency control loops due to power changes produced by renewable energy sources (RES). This, in turn, will require the assessment of the impacts of the network's Economic Dispatch. Besides, the role of new technologies in the LFC scheme also needs to be analized in consideration con the new requirements for compensation.